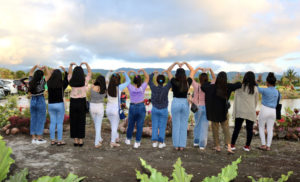 I just walked through what will be the next aftercare facility that will come online for Compassion First in Indonesia. It’s fitting that we are considering her imminent open date as we look toward this Holy Week. The shelter was an unexpected gift but clearly part of a promise and fulfillment that could only be provided by Him.

While we had hopes and dreams to expand to West Java, the onset of the pandemic put those plans in peril – at least in our minds. And while we have missed so many things in this season, it seems that growth into new places isn’t one of them.

Late in 2021, a pastor in Indonesia, Pastor Djono, approached us about a property he had built in West Java. God had told him to give it to us for our work. It put us on our heels for a moment because we had paused any hope for expansion until the pandemic passed – we just didn’t know what life was going to be like for the next season of time. About two weeks after his initial offer, he called again and said, “What are you waiting for? God told me to give you this property.”

It seems to me that growth and expansion has been the purpose of this difficult time we have all gone through. The greatest focus of my time in the Scripture and meditation of late has been around Jesus’ conversations with Peter leading up to the cross and following the resurrection. They are profound and humbling because I see myself in Peter. Preachers often poke fun and take cheap shots at Peter, but I love him. I identify with him.

In Matthew 16, Peter is the first to say that He thinks Jesus is the Messiah. He believed in Jesus fully. In verse 17, Jesus affirmed that it was God Himself who had told him this. It wasn’t taught or learned; it was something he now knew in his heart.

Jesus goes on to give him his new name and show him a glimpse of his future:

Jesus replied, “Blessed are you, Simon son of Jonah, for this was not revealed to you by flesh and blood, but by my Father in heaven. And I tell you that you are Peter, and on this rock I will build my church, and the gates of Hades will not overcome it. I will give you the keys of the kingdom of heaven; whatever you bind on earth will be bound in heaven, and whatever you loose on earth will be loosed in heaven.” (Matthew 16:17-19)

This is where Peter and I fully connect. Following this, it is clear that Peter started crafting plans that differed from the plans and promises of Jesus. Only five verses later, Peter effectively declares that he’s going to intervene in the crucifixion and resurrection of the Savior. After just calling Peter the rock upon which the church will be built and never prevailed against, Jesus says to him, “Get behind me, Satan!… You do not have in mind the concerns of God, but merely human concerns.” (Matthew 16:23)

I’m humbled by the plans and promises of God, always. He keeps every one – the ones we know about and the ones that are a mystery to us.

Things are bounding forward for us on the most populated island in the world. God has not forgotten this place… He will keep every promise He has ever made to these beautiful people.

We will be opening in West Java soon, and we will also be moving our National Office to Jakarta in the next couple of months. We would love it if you were a part of our story there. It includes an expansion of our Compassion First family, with the hiring up upward of 30 people over the next year. We’ll soon be furnishing the house, buying vehicles, and getting all of our set-ups in place. Prayerfully, it will lead to further expansions, including border/transit monitoring and integration with our work in East Java and Bali.

To healthily expand into West Java, we need monthly partners to come alongside us as Survivor Sponsors to help underwrite the cost of our holistic residential aftercare. Survivor Sponsors’ consistent partnership provides housing, schooling, health and legal care, extracurricular activities, and whatever else is needed for a full life. Because of this support, the young women in all our residential care facilities can focus on what they need to – healing and preparing for their futures.

If you are already supporting the beloved young women in our aftercare homes through Survivor Sponsorship, please allow me to sincerely say thank you. We could not do this without you. If you are not currently a Survivor Sponsor and would like to consider becoming one, you can get started today at this link.

In the meantime, I sincerely pray that this Easter season brings continued growth and expansion for you personally. That seems to be the case for me. I’m more in awe of Jesus than ever as I realize that He didn’t just keep all of his promises to humanity; He also kept all of His promises to each and every one of us.

Growing closer to Him,